I finally captured the Milky Way

Hi,
As I mentioned on my last post, myself and Melissa had been invited to Butser Ancient Farm in Hampshire by a friend of hers who is a member of the HantsAstro group. The group normally does members only evenings, but this was one of those evenings when friends and family of members are welcome to come along
Now, I was expecting to see some cool looking telescopes, but the ones that were there blew me away! I think I was expecting much smaller telescopes...ones that would be easily carried and transported in a car! Nah...these guys don't do things by halves!!! The majority of the telescopes that were set up were on rotating swivel boards and were about 2 feet in diameter and about 6 or 7 feet long. All evening long you could hear the whirr of automatic motors turning the telescopes as they tracked whatever stars or constellations the operator was looking at. They were all very willing to let us guests come and have a look at what they were seeing and would happily explain what particular systems we were looking at.
This was a very well organised event, with talks on astro imaging and the history of astronomy...and pizzas. Lots of pizzas :-)

Of course, I had brought my camera with me as well. I always like the opportunity to capture a nice star trail so set it up near the back of the group with the idea of capturing some of the replica thatched buildings in the scene. I realised very quickly that the image would also capture quite a lot of people movement as they milled around their telescopes and the wavering red lights that they wore on their heads, but I thought this would add something a bit different to the scene so decided not to re-compose.
Condensation turned out to be the enemy that night! The sky was as clear as I had ever seen it and was happy sat back in my chair staring upwards to spot any sporadic Perseid meteor that hurtled past. Every now and again I would check my lens and it was completely misted over. I could hear several of the astro guys complaining about the condensation as well.I have downloaded the start trail images onto my laptop and started working on them last night, but i think I'll have to do quite a bit more work to rescue as many images as possible before trying to stack them into the final trail image. I'll keep you posted on that one.

The evening wasn't a total loss however...and this is the one I am really excited about. Once I stopped my camera taking trail images I recomposed to try and capture the Milky Way which was directly overhead. Now, I have tried several times in the past to get an image of our galaxy but have always been scuppered by bad weather or light pollution. This time I was successful :-) 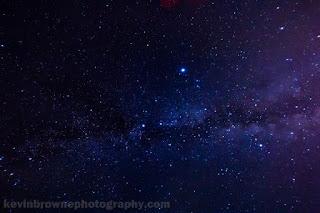 To view a bigger version of this image have a look at it on my Facebook page here. While you're there why not "Like" my page to keep up with the latest uploads and updates.
This was taken with my Canon 70D, Sigma 10-20mm at 10mm, f/3.5, ISO3200 at 30seconds long.

Next on the agenda for me is trying to find some clear skies somewhere around Hampshire, Dorset or Wiltshire tonight to watch the peak of the Perseid meteor showers, and possibly do some light-painting with a friend of mine. He had originally suggested going to Avebury stone circle in Wiltshire, but is now also talking about Corfe Castle as there is the possibility of thunder and lightning! Whatever happens...and wherever we end up I will hopefully have some new images to share in the next few days.