After my last photo trip to Dorset a couple of weeks ago, I was struck with the bug to capture a photograph of Corfe Castle peaking out of the mist. After checking the forecasts on about three different weather apps last night myself and my friend Mark were pretty certain we would be rewarded with something good. So, it was agreed that Mark would get to my house in Southampton by 6am and I would drive us down to Corfe Castle.

Well, as many photographers who have tried the same thing at Corfe Castle on many occassions, and failed, we were to face the same result. Not a hint of mist, and very few clouds in the sky. So, having photographed there only two weeks before and the conditions looking very similar to that last trip we decided to head to Kimmeridge Bay for something different.

This was my first time at Kimmeridge, and I must admit to being slightly excited as I had seen so many wonderful images of the place on sites like Flickr, Facebook and 500px. I had looked it up on Google Maps yesterday, but what you don't realise from the satellite images is the sheer vertical cliffs that surround the beach, with only a couple of pathways leading down to the rocky beach. Once down on the beach it was very easy to see how shallow it actually is, as the flat rock formations very slowly slope downwards on their way out to sea. The tide was on its way out, but one good wave would bring it all the way back up to the high-tide line and we would have to move out of the way. 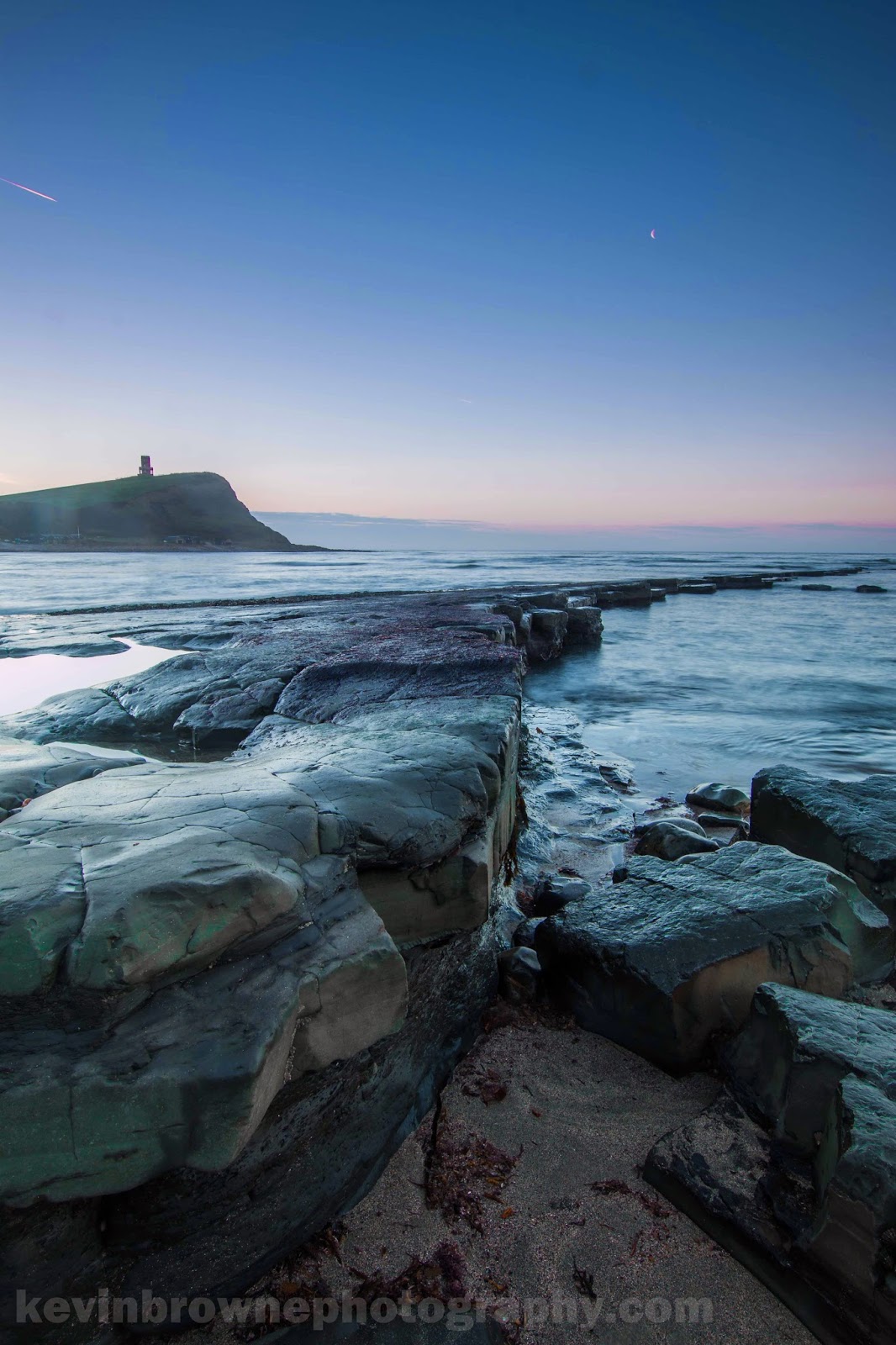 One of the many rock lines gently sloping out to sea.

When we arrived there was barely a breeze and it felt very mild, considering it is meant to be January. The sky was clear, apart from a thin line of faint cloud on the horizon. We set up the tripods to capture one of the lines of rock acting as a leading line in the images.

The small building you can see on top of the hill near the top of both of these images is Clavell Tower, which would make a great foreground subject for a star-trail image I think :-) 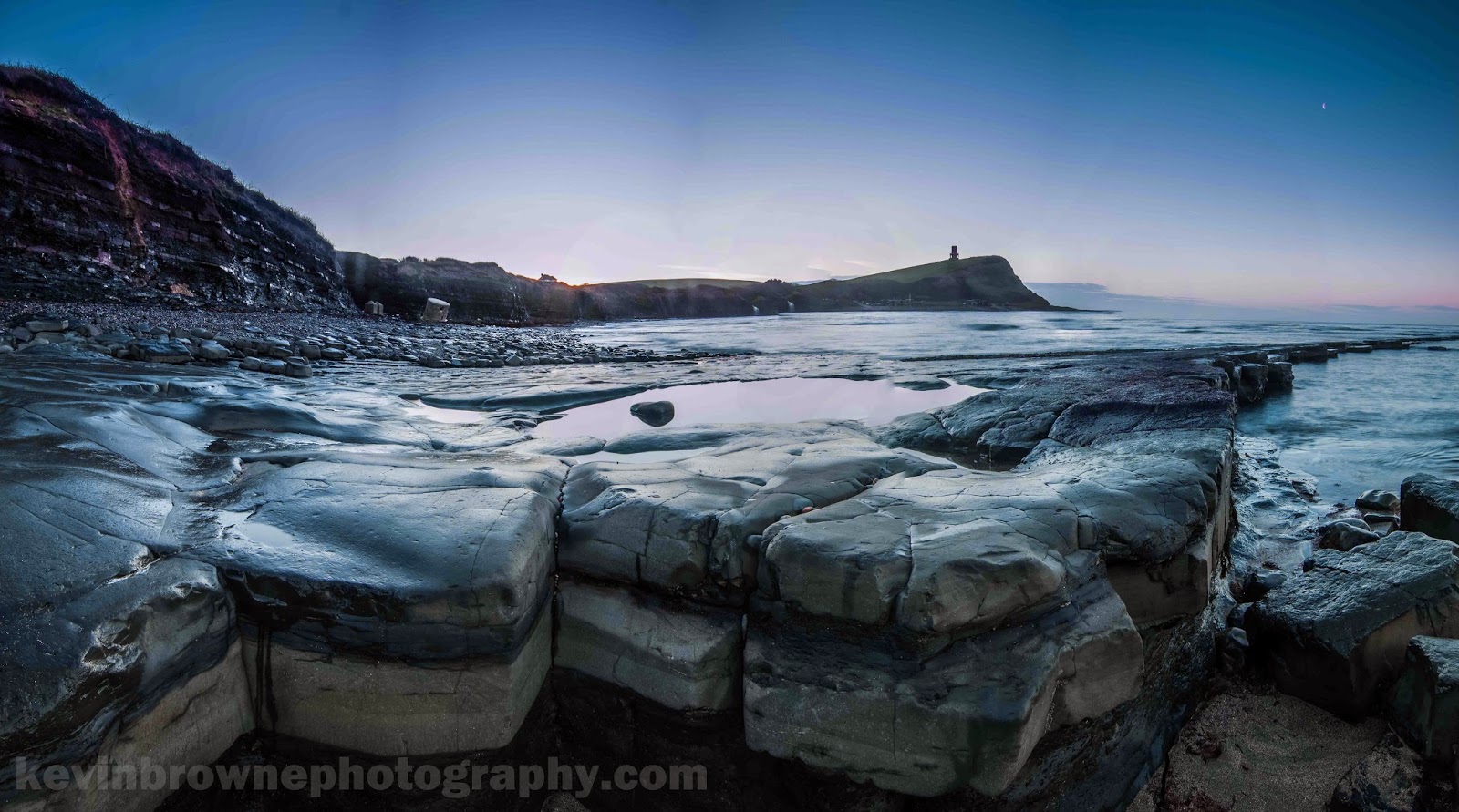 There are so many photographic possibilities at Kimmeridge that I am really looking forward to getting down there again. In the panoramic image above you can make out the tilting remains of a World War II Pill Box, which appears to be slowly making its way down the beach. This in itself could be a very interesting subject, as well as the chances for some close-up work on the interesting rocks and pebbles to be found on the beach.

So, on my first trip to Kimmeridge I am really impressed. It is a location which could produce stunning photographs at any time of day, not just sunrise or sunset. I will definitely be back.

Oh, and on a different subject, I'm looking forward to getting a printed copy of Hampshire Life magazine so I can see what my photograph looks like on the front cover. I'm in print. I'm published. Ha ha :-)

Until next time, have fun.

Just a bit of an update to my last post.
Those of you who read my last blog post (here) would know that I got an email from the editior of Hampshire Life magazine asking if they could use one of my images in their February issue. You will also know that I of course said yes.

Well, the update on that is that the editor emailed me again a few days later and said the image would work really well on the front cover! After a few back-and-forward emails and a quick phonr call I sorted out the correct sizing of the image for the front cover and away it went. I'm really looking forward to seeing what it looks like on the cover. I might just be buying more than one copy :-)

As if that wasn't enough, the lovely editor asked for another image for the inside of the magazine. TWO images in one magazine...I'd better stop, my head is going to get too big ;-)

When I get a sample of the front cover I'll post it here. In the meantime here are links to the two images being used.

Front Cover: Sunset at Brately View in the New Forest
Inside Image: Long exposure at Milford-On-Sea

Until next time, with HUGE smiles

Good evening everyone,
I'm in a happy mood today. You know one of those days when good things just come along all at once and even if you're having a rubbish day at work it doesn't matter? yep, one of those days :-)

Why? Because of a couple of things.

Firstly, some excessive Tweeting over the last couple of weeks may just well be starting to pay back. I have been busy on my Twitter account testing out reaction from some local businesses to see if they would be interested in displaying some of my photos. Ok, so I tweeted a LOT of them, and it was getting to feel like I was some sort of stalker, but I've had some really nice responses and encouragement...and some genuine interest. I've had a couple of cool venues reply to me saying that they want to talk further to me. It's early days, but I'm keeping my fingers crossed we can come to some sort of mutually beneficial agreement. If/when it comes off I will certainly be posting some details about it.

Secondly, I received an email today from Hampshire Life magazine saying they wanted to print one of my images, and could I do a write-up on why I photograph Hampshire and what this particular image means to me. Ok, so I don't get paid, but they've asked me to include my website details "in case any readers would like to purchase a print of it". The exposure and possible interest is what I'm after at the moment, the chance for extra interest in my website. Hampshire Life magazine is seen by a LOT of people. This image is going to be printed in the February issue. I'm a happy boy. 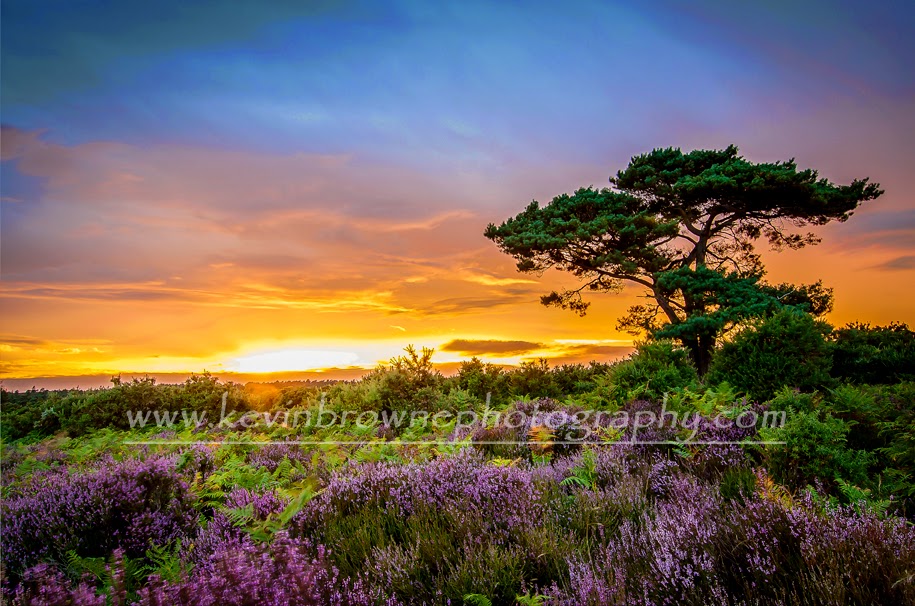 Oh, I almost forgot. Another reason to be happy...I've just sold another canvas print of this image as well :-)