From October through to now...

So, on my last post I showed you an image of what I had been chasing for just over 4 years...the iconic shot of Corfe Castle rising out of mist at sunrise. That one is still one of my favourite images I have ever captured.

So what else have I been up to since then!

Well, as I mentioned in that last post, Melissa and I went on holiday to Padstow in Cornwall for a week. Cornwall is such a beautiful part of the UK, and I wish we were there for more time as I would have loved to have captured more of it on camera.
We took ourselves off to The Eden project, did a boat trip out of Padstow, had an amazing meal at Paul Ainsworth's restaurant called No. 6 (the best meal I've had in goodness knows how long) and generally had a great time. I even managed to convince Melissa to come out for a sunset with me to Trevose Head Lighthouse. She wasn't too keen about the steep climb down to the best vantage point but it was worth it for this image: 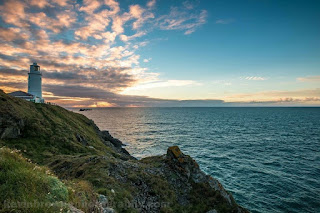 On one of the days we went to Tintagel Castle. Blimey, those steps up to it are unforgiving! I was carrying my camera gear with me, so I definitely needed a sit down when we got to the top! Before we faced that climb though, I had a little play at the very bottom, at Melin's Cave: 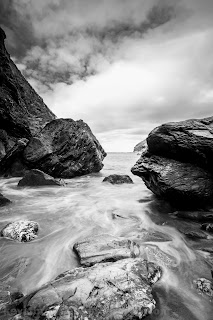 On our way back to our rented house in Padstow we stopped off at Trebarwith Strand. Honestly, you could spend months wandering around just that part of Cornwall and never become bored of the beautiful surroundings. 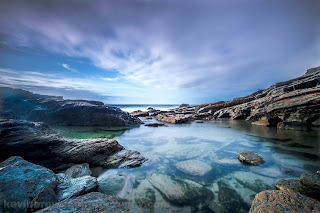 After such a beautiful week away in a beautiful part of the country with my beautiful girlfriend, we came back home to plan our combined house warming/Halloween party which about 40 people were coming to. We went all-out on the decorations and costumes ha ha: 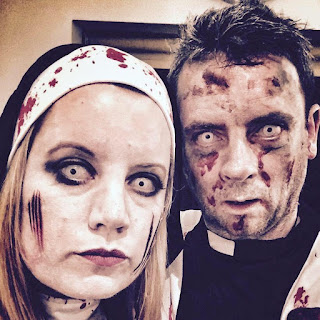 It has been such a busy time that I haven't had a great deal of spare time to get out with my camera but there have been a few times that I have been lucky! 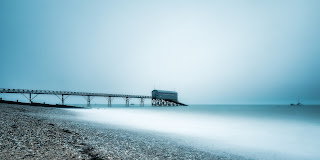 And most recently, the World war 2 "dolphins" at Lepe beach in Hampshire: 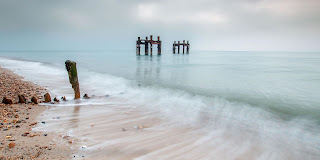 I have been doing some portraits as well. Trying to get into that more now and practising as much as possible. I'll show some of those on my next post :-)

Don't forget to sign up for email updates on this blog page to get notified when my next post is live. And, as always, my images are for sale through my website: www.kevinbrownephotography.com

So, here's what's been going on since I was last here...

Given half a chance life certainly does run away with your time doesn't it! In the blink of an eye months have passed since my last blog post!

My last post was in September, just after myself and Melissa went to Goodwood Revival. So, what's been happening since then? Quite a lot and not a lot as well. I managed to get a photo that I have been trying for for 4 years and have been caught up in the normal day-to-day business of work, house and kids. But it has all been great...I wouldn't change any of it, but a lottery win might help!

Back in October myself and Melissa had booked a week off work to go and have a little break together in Padstow in Cornwall. In the week running up to that there had been several mornings when the sunrise came through a heavy mist and created beautiful scenes on the way to work. I decided to keep an eye on the weather for the rest of that week and had Corfe Castle in my thoughts.
On the Friday evening I made the call and set my alarm early and got my camera bag ready for the drive down to Dorset.

That Saturday morning (4th October) I left the house in the dark and headed on to the M27 to head for Corfe Castle...and the stars were shining brightly in the sky. This caused me a bit of concern because I hoped that a mist would develop. I needn't have worried because as I got closer to Wareham I was actually driving through a heavy fog.

It seemed I wasn't the only person who had decided to head there as well. There were at least 15 cars in the car park and looking up the hill opposite the castle I could just about make out the wobbling lights of head torches dotted all over the place. I parked up and started the killer slog up the very steep hill. I had to go up higher than I normally do because the fog/mist was so thick, but finally I broke through to the clear air and looked back towards the castle...and couldn't see it! It was completely covered. That at least gave me time to climb a little higher and find a good vantage point and get set up to wait for the mist to start burning off.

Apart from the odd muffled conversation going on between other photographers on the hil, the silence was all-consuming, and it was wonderful. Moments like that don't happen to us very often in our hectic lives, so I was happy to just sit amongst the gorse bushes and soak it up. Then it happened...

The mist started moving in the breeze and the very top of the castle started to peak through. The sun hadn't quite broken over the distant horizon but I fired off some shots to check I was happy with my composition and settings. I took a quick picture on my phone and texted it to a friend who has also been trying for years to get conditions like this at Corfe. Ok, it was a bit of a gloat but it was a good mannered one ha ha. His response was one of those that I should really leave to your imaginations.

As the sun broke, the sound of cameras clicking could be heard from all directions. As I took my photographs there was a constant smile on my face. More because I felt so lucky to be there to witness such natural beauty happening right before my eyes.

And the result? Here you go... 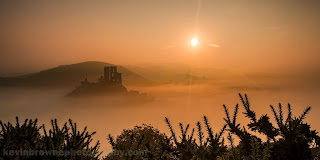 You can of course see a much better version of this image on my website - www.kevinbrownephotography.com

Later that day Melissa and I were heading off on our break, so even though I could happily have stayed there until every last remnant of mist disappeared I knew I had to get back home and pack the car for the long drive to Cornwall.

I will do another update on our week in Cornwall on another blog post later this week.

Until then, I'd love to know what you think of my Corfe Castle shot.